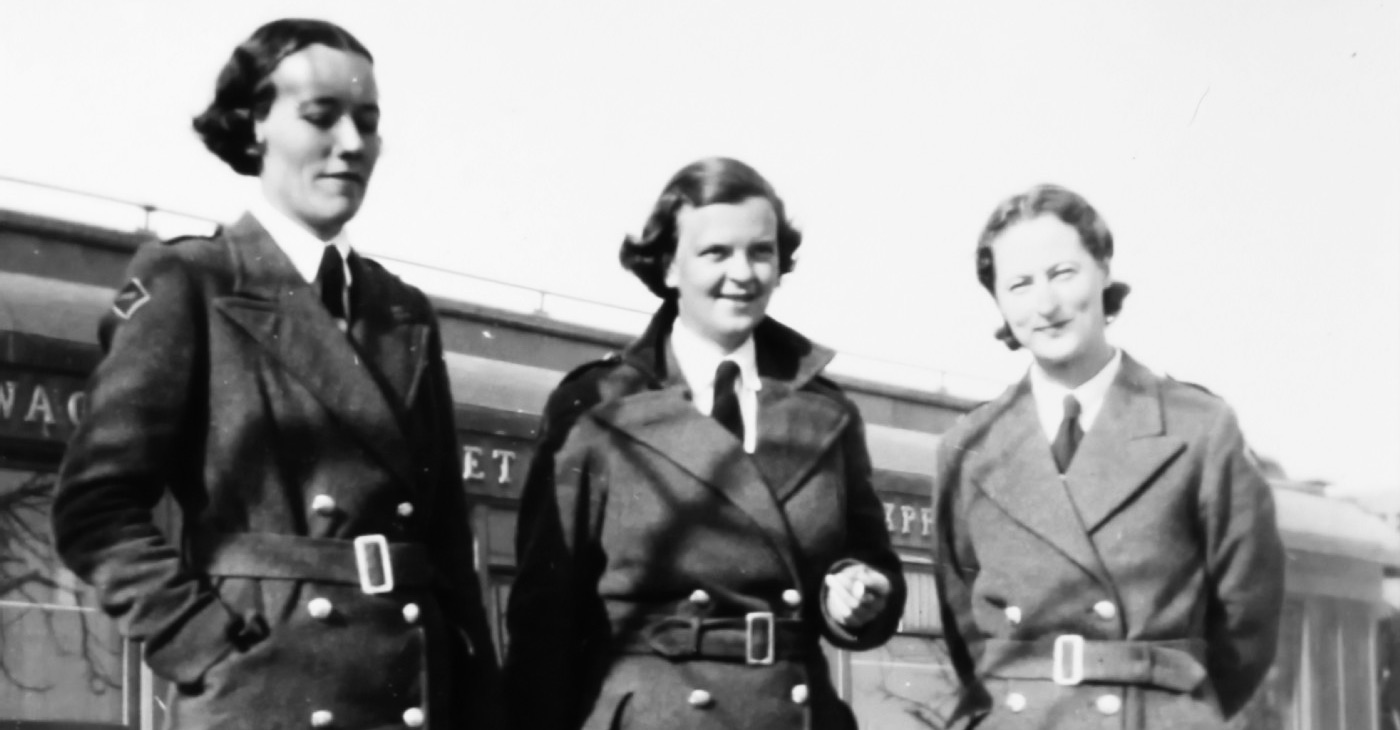 During World War II, thousands of women were employed by the Allies as code breakers both in Europe and across Asia. In the Pacific Theater, the U.S. Marine Corps also recruited some 500 Navajo code talkers to transmit messages in their native language, because it was unintelligible to the Japanese.

In my WWII novel Glorious Boy, Claire Durant volunteers to use her knowledge of indigenous languages to both break and make codes for the British in Calcutta in 1942. Claire, a young anthropologist, has spent six years studying the indigenous Biya tribe of the Andaman Islands, off the coast of Burma. She only left the islands under duress, on the eve of Japanese occupation, after her four-year-old son went missing. Her husband, Shep, a physician and botanist, forced her onto the evacuation ship while he stayed behind to search for their child, and Claire hasn’t seen either of them since. Her fervent hope is that, by making herself indispensable to the Secret Operations team that’s headed back to the Andamans under cover, she’ll be able to help rescue Shep and little Ty.

To write this book I researched the fascinating history not only of the Navajo code talkers but also their WWI predecessors, the Choctaw code talkers, as well as the brilliant and indefatigable female code breakers whose stories have only recently been told in television series like The Bletchley Circle and in books, such as Code Girls The Untold Story of the American Women Code Breakers of World War II; The Bletchley Girls; The Emperor’s Codes; and Between Silk and Cyanide.

This excerpt from Glorious Boy will give you some idea what it was like for Claire to make and break secret languages for the war effort while simultaneously managing the terror and the grief that tormented her, like so many during the war, over her missing loved ones.


Ward and his team will be four altogether, and of them Sergeant Culman, a young Royal Signals operator from Brighton who escaped Rangoon, is the only stranger to the Andamans. The others at least can picture the source of the language they’re learning, though none has actually heard it spoken. Hari Khan, a former MP from Dehradun, was stationed in Port Blair in the early thirties. Luke Benegal, a forest worker, grew up on a coconut plantation north of Mount Harriet.

Several days after their initial introduction, while Ward and Culman are out of the room, Luke asks Claire if by any chance she might be related to Dr. Durant in Port Blair. Ward has explicitly told her not to reveal her personal details, so she can only nod obliquely, but her face gives her away.

Hari and Luke exchange glances, then Luke says he knew Shep. He accompanied him several years ago on an inland collecting trek. “We found a leopard orchid so enormous that one root alone nearly capsized our boat!”

His narrow, feline face widens into a grin before he catches himself. “I am sorry, Mrs. Durant.”

She shakes her head, swerving. She has no recollection of that orchid or of Shep’s talking about that excursion, and it would be best not to show too nakedly how grateful she is for Luke’s memory, but her throat seizes up on her.

“I’m sorry,” he says again. “That was the only time we spent together.”

“Please,” she manages, addressing both men. “Please call me Claire.”

Now every day of delay is excruciating. But two months will pass before the operation receives final clearance, and as it turns out, the team needs every minute to learn and fine tune the code.

Luke, who can giggle like a mongoose and imitate half a dozen birds, proves the quickest study, especially in the vocal code that the team will use for mobile communication with each other. Hari can produce the sounds, but his inability to memorize the code gives her pause until she learns that he’s sharing barracks with a bagpiper who delights in tormenting the “wogs” by playing when the men are asleep. His memory improves dramatically after Ward arranges for the team to be billeted together in a bungalow by Governor’s Park.

Unfortunately, the slowest of her students also are the most vital. Neither George Culman nor Denis Ward, it seems, has ever before attempted to speak a foreign language. George is a genius with wires and batteries, and he was a strong contender for Britain’s Olympic pentathlon team heading into the War, but while his facility with equipment extends to numeric ciphers, it seems to hit concrete when it reaches his tongue. His difficulty, she suspects, is mechanical. Even in English, George’s speech is halting, and ultimately, they agree that he’ll concentrate on the written and Morse versions and leave code talking to the others.

Ward has no such excuse. He simply thinks that anyone who speaks a different language should or eventually will learn English. That the current terms of battle expose this linguistic arrogance as a weakness does not sit well with the major.

“Bollocks!” he’ll erupt and storm out of the room, leaving the others to grin at their hands.

Claire herself hits a wall when it comes to devising the final code words for precision formations and weaponry. If Operation Balderdash is to fulfill its official mission, the team will need to relay the exact size and composition of enemy installations and troop and fleet movements. Unfortunately, the only weapons in the Biya arsenal are spears, bows, arrows, knives, and harpoons. How to translate Stone Age tools into modern implements of war?

It’s Hari who suggests they work on the problem together. “If we design the terms,” he says, “perhaps we will have less difficulty to remember them.”

So, one day when Ward and Culman are meeting with Hastings and the higher-ups about their logistical requirements, the rest of the team pores over Claire’s master glossary in search of inspiration.

“What about the animals?” Luke points at the long list under the heading Fauna. “Snapping turtle. Dragon fly. Beetle.”

“But what do they mean? We must employ logic. And the sound of the word in Biya must not give anything away.” Hari frowns at the page.

“Attangadaang, for example. This sounds too much like an antiaircraft volley.”

“If we could come up with a simple principle,” Claire says when the laughing subsides. “The sound the animal makes, perhaps, or the way it moves. Some essential trait that resembles the weapon.”

“The birds should be the guns, because they shoot sound.”

“The fish should be the boats because they swim.”

“And the footed crawling things — lizards and turtles — those can be land vehicles!”

Hari grins. “And the Japanese are dogs!”

“You know, there were no dogs in the Andamans before the British,” Luke Benegal says with a sidelong look at Claire. He wouldn’t dare if Denis and Culman were present.

“All right,” Hari says. “Then maybe the British should be the dogs and the Japanese become cockroaches. Look here, the small cockroach is an easy one — taahu.”

In this fashion, the codebook is completed.

One evening she walks in on Ward and Hastings conferring over a yellow wireless form on the Colonel’s desk. She starts to retreat, but Hastings beckons her in.

“Something unusual. It was taken down months ago by one of our subs, but no one could make hide nor hair of it. It didn’t resemble any known code, and no one could find another like it, so they chalked it up to an error in transmission. Then one of the melders back at Bletchley was culling through the dregs when she noticed what looked like our call sign, not at the top, but at the end of the message. The major thinks the rest looks like your code. If he’s right, yours is worthless and we’ll have to start from scratch.”

The men step back, and the Colonel offers her his chair. She lowers herself without breathing. Without the code, she’d have no access to Ward, and he’d likely shut her out of the operation entirely.

She holds the paper under the lamplight:

“It came through in Morse, no spaces or stops.”

She stuffs her heart back in its cage. The tricks with ciphered messages, she’s learned, are nearly endless. There’s no knowing. You might have to drop every third letter or replace each letter with its counterpart from the end of the alphabet, or strip out repeating combinations, like IN or CH, before applying the key. But that assumes you have the right key, which could be anything from a limerick to a one-time pad. Anything from anywhere.

She searches for the numbers and preamble that normally frame these messages to help operators redirect them, but there are none. This suggests the work of an amateur.

“Where was the sub when it picked this up?”

“That’s the thing.” Hastings gestures to Ward, who repeats the coordinates that the operator noted when the message was received, then pinpoints the location on the Colonel’s wall map. “Twenty miles south of Neil Island.”

“You’re saying it could have come from Port Blair?”

“Exactly what troubles us.”

The date of transmission was April 29. More than seven months ago. She stares at the smudged yellow margins to steady herself, then relaxes her eyes until the letters swim.

Combinations form that could sound like Biya, but since they’re dealing with a spoken language, spelling can’t be certain. Ward hands her a notepad and pencil, and she begins to separate, add, and scramble letters into possible words:

Ward and Hastings peer over her shoulder. “Second one sounds like a warning,” Hastings mutters.

“What place? What could brain mean?”

“Stop it!” Claire looks up in exasperation. “I’ve barely begun.”

“And we could be totally off base,” says Ward.

“We’ll leave you to it,” Hastings tells Claire. “Give a shout if anything surfaces.”

When they’re gone, she digs her knuckles into her eye sockets until she sees sparks, then stares at the message until the sparks clear. This has the effect of shuffling the letters.

For hours, she scribbles line after line of gibberish. Her vaunted codebook gives her nothing.

Library Journal calls Glorious Boy “a fascinating, irresistible marvel.”. You can buy the book and support independent booksellers at Bookshop.org.

* This article is also posted at AuthorAimeeLiu@Medium.com