Aimee Liu is the bestselling author of the novel Glorious Boy, as well as Flash House; Cloud Mountain; and Face. Her nonfiction includes Gaining: The Truth About Life After Eating Disorders and Solitaire. Aimee's books have been translated into more than a dozen languages. Her short fiction has been nominated for and received special mention in the Pushcart Prize competition. Her essays have appeared in the Los Angeles Review of Books, The Los Angeles Times, Poets & Writers, and many other periodicals and anthologies.
Aimee received her MFA from Bennington College and taught fiction and nonfiction for many years in Goddard College's low-residency MFA program in Creative Writing.

For a comprehensive article about her career,
check out this post on @Medium: About Me--Aimee Liu 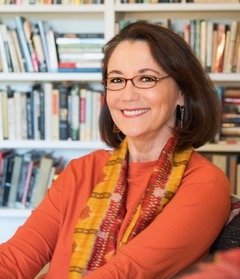 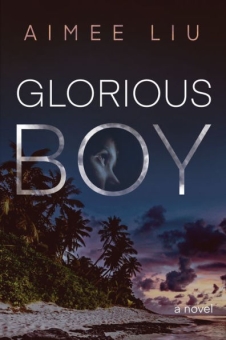 Glorious Boy is also available as an audiobook!

"The most memorable and original novel I've read in ages… evokes every side in a multi-cultural conversation with sympathy and rare understanding."

Finalist for the 2020 Staunch Book Prize

"For readers who are unafraid to be swept away." Starred review, Booklist*
Travel+Leisure's 20 New Books to Gift this Mother's Day"
"Riveting... a fascinating, irresistible marvel." Starred review, Library Journal*

"In 1942, Claire Durant waits with her husband and young son for the all-clear to leave the Andaman Islands, where they’ve been stationed since 1936. The Andamans, east of India in the Bay of Bengal, are home to a colony of Burmese and Indian convicts as well as the native people, the Biya. Claire, a budding anthropologist, has been studying the Biya and getting to know them, but as WWII intensifies, she has no choice but to leave the people she loves. There is one other complication: Naila, their young servant, has a special relationship with Claire’s son, Ty. And when Naila disappears with Ty, there’s no telling what will happen to the family as they are wrenched apart. This fascinating novel examines the many dimensions of war, from the tragedy of loss to the unexpected relationships formed during conflict. The Andamans are a lush and unusual setting, a sacred home to all kinds of cultures and people, and Liu’s prose is masterful. A good choice for book groups and for readers who are unafraid to be swept away." --Booklist  STARRED review

To read an Excerpt from Glorious Boy

The subconscious has its own way of saying goodbye

My mother died one year ago today, yet she remains deeply present in my life —  largely through our dreams together, which seem to be multiplying. Most of these nocturnal reunions skip into oblivion as soon as I wake. When a dream is particularly vivid, though, I try to scrawl its contours in my dream journal.

Still half asleep in the dark, I’ll write blind before the movie in my mind flickers out. And somehow, these half-conscious scribbles are surprisingly decipherable. Like hieroglyphics, they provide just enough imagery — stairs, foliage, faces, signs —  to bring the mental story right back to me. In this way, the recent dreams involving my mother have re-emerged like prose-poems from the subconscious — or some other metaphysical zone. Consider this one:

I’m back in my childhood neighborhood with Mom as my guide, photographing all the old houses before they’re gone. She reminds me who lived in which glass house. The O’Neils. The Steinmetzes. The Bigelows and Barkentins. All now gone, though she is here. We trudge through the woods, needing to catch up, to explore, to remember where the Amusement Park is before it, too, is gone.

Yung Wing, my grandfather, and the seeds of China’s pro-democracy movement

by Aimee Liu
In 1900 my grandfather Liu Chengyu became one of China’s first pro-democracy activists when he joined a student-organized plot to blow up an imperial armory near his home in Wuchang. The plot was exposed and several of my grandfather’s young collaborators were beheaded, while he escaped into exile. In today’s New York Times Morning newsletter, I felt as if I was reading about my grandfather through a time warp.

Not many people today give much thought to the activists who first introduced the notion of democracy to China. So many political, economic, and military convulsions have since gripped the Middle Kingdom that the idealism of those early revolutionaries now seems both quaint and tragic. But they were every bit as brave, hotheaded, and patriotic in their time as the college students who dare to oppose Xi Jinping today.

For those who are following China’s pro-democracy movement, I offer this annotated extract from my grandfather’s memoirs, in which he meets an even earlier godfather of democracy in China, the 19th-century diplomat and Yale graduate known in America as Yung Wing:

In 1901, after I was implicated in the T’ang Ts’ai-ch’ang case [the plot to blow up the armory], I fled to the safety of Shanghai. There my friend who had just returned from Japan, invited me to accompany him to Hong Kong to meet the famous Jung Ch’un-fu, who was known in America as Yung Wing.

It startled me when I first read this name in my grandfather’s book. I’ve been fascinated by Yung Wing for years. He was the first Chinese person ever to study in America; he graduated from my own alma mater, Yale, in 1854. After that he shuttled between America and China to champion better relations between the two countries, and in 1872 he launched the Chinese Educational Mission, which brought more than one hundred Chinese boys to study in New England. Yung Wing had an American wife, as did my grandfather, but this passage was my first notice that they personally knew each other.

My Father's Secrets, Decoded at Last

My father was his family’s gatekeeper. Born in Shanghai in 1912, the eldest of his biracial siblings, he was raised to straddle East and West. He kept the peace between his Chinese father and American mother. And as the one member of his family who corresponded with those he’d left behind after moving to America in the 1930s, he alone held the secrets that could wound, shame, and inflame the relatives who’d immigrated with him.

Those secrets lay buried in the mass of junk that Dad hoarded throughout his life. After he died in 2007, I took the lead in curating this tangled mess. Both as a writer and as his daughter, I was fascinated by the mystery surrounding my remote, taciturn father. I hoped that in all his stuff, I’d discover the reasons why he claimed to remember so little about his past in China. Fifteen years later, I’m finally beginning to decode the evidence he was shielding.

Yellowface in the Family

I was cleaning out my father’s office after his death when I discovered the history of his movie years, stuffed into a soft red and gold Moroccan leather folio. This trove of yellowing newspaper clippings and gauzy headshots thrilled me. Here at last was the archive that would help me piece together Dad’s unlikely acting career 70 years earlier.

He’d never wanted to talk about his Hollywood days. MGM’s 1937 version of The Good Earth was the only movie he’d admit to being part of, which was odd because he hadn’t even made the final cut. His appearance as one of the uncles in the opening scene wound up on the editing room floor. He also worked as a technical consultant for the crews that shot in China. Dad had grown up in Shanghai, the son of a Chinese official who’d remained in Nanking after Dad’s American mother moved the rest of the family to California. My father doubtless was very useful to the production, given the various wars and political intrigues that were brewing in China at the time, but this role, too, was uncredited.

Not until late in his life, just a few years before he died, did I learn that both Dad and his sister Lotus performed onscreen with some of the biggest movie stars of the 1930s. On an idle whim, my brother had searched for their names on IMDb. According to his listed credits, our father, Maurice Liu, played the Hawaiian bridegroom in Waikiki Wedding, starring Bing Crosby. In Shadow of Chinatown, a Bela Lugosi vehicle, Dad appeared as a house boy. In West of Shanghai, with Boris Karloff, he was listed as a train conductor. Lotus had nine films under her name.

The Foster Sister I Never Knew

Why did my parents really let her go?

I was born three years after my parents gave my foster sister back. As far as my mother was concerned, I replaced her. My father, I’m not so sure. Josie would have been about six by then. My brother, Marc, was seven. I grew up without knowing the first thing about Josie’s existence.

Only as an adult did I trip across the one photograph that my parents seemed to possess of her. There, tucked into some ancient album, appeared a small blond stranger stepping down Fifth Avenue between my equally small older brother and our fashionable mother. Easter, 1949, the caption read. My mother wore a black veil, white gloves, and a fox stole with its jaws biting its tail to secure it around her shoulders. I recognized the fox, which still hung in the coat closet. I recognized my brother and mother, though I’d never known them so young. But who was that other toddler?

“That’s Josie,” my mother informed me. “She was our foster child.”

“We had a foster child?” Every word of that sentence sounded improbable.